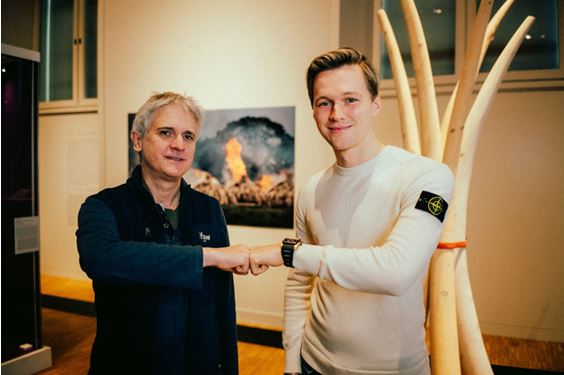 The IFAW is a global non-profit animal and species protection organisation that campaigns for the better coexistence of animals and humans. It rescues and cares for animals, returns them to the wild and preserves and protects their natural habitats.

With a strong network of dedicated people, the IFAW has been able to save more than 275,000 animals worldwide in the last 20 years. World-renowned primatologist and anthropologist Dr Jane Goodall and actor and activist Leonardo DiCaprio use their fame to raise awareness about the importance of animal and nature conservation and other urgent issues such as climate change.

As an animal and nature lover, the protection of endangered species and the world’s oceans lies particularly close to Maximilian Günther’s heart. He grew up in the Allgäu region and has been very connected to nature from an early age. He regularly uses his home environment at the foot of the Bavarian Alps as an outdoor training ground and retreat to recover from his fast-paced everyday life as a racing driver. Therefore, it is a pressing concern for him to draw attention to the problems of climate change and to encourage the population to rethink their daily actions.

Maximilian Günther, Nissan e.dams Driver: “It is a great honour for me to be an ambassador of the International Fund for Animal Welfare for the protection of animals and the environment. I appreciate and support the IFAW because I am very impressed by its passionate work in this area.

Playing my part in this matter makes me very proud. I care very much about the welfare of animals and our nature and I think it is our task to counteract climate change. The ABB FIA Formula E World Championship is a racing series that focuses on sustainable, renewable technologies and it is the perfect platform to make people aware of the importance of conservation.

Each and every one of us needs to take responsibility and do our personal part to live a sustainable, environmentally conscious life. We have to start now so that the earth remains livable for future generations.”

Julika Riegler, Deputy Head of Communications and Brand Marketing at IFAW: “Driven by bold thinking, smart action and unexpected connections, the IFAW is pleased to welcome Maximilian to the team. For any industry, conservation should be a top priority and Formula E is following this path. We thank Maximilian for taking this commitment a step further and using his voice as an IFAW Ambassador to protect animals, people and their habitats.”

The IFAW (International Fund for Animal Welfare) is a global non-profit organisation working for the better coexistence of animals and humans. It operates in more than 40 countries around the world and on the oceans. The IFAW rescues and cares for animals, reintroduces them into the wild and preserves and protects their natural habitats. The problems that the IFAW faces are urgent and complex.

Solving them requires bold action and smart thinking. The organisation works with communities, governments, other NGOs and companies. They work together to find new and innovative ways for all species to thrive in their habitats. More information: https://www.ifaw.org

In season 6 and 7 of the ABB FIA Formula E championship, the German raced with BMW i Andretti Motorsport and was works driver of the Munich-based manufacturer. Since the fifth season, he has been competing in the world’s first all-electric FIA Championship for formula cars, which mostly takes place on street circuits at spectacular venues such as New York, Hong Kong, Paris, Rome and Berlin.

Maximilian Günther has worked as a test and development driver for Jay Penske’s American team GEOX DRAGON since the beginning of 2018 and was significantly involved in the development of their Gen2 car. In the same year, he took part in the FIA Formula 2 Championship, where he won the prestigious race at the Grand Prix of Great Britain.

In Season 5 of the ABB FIA Formula E championship, Maximilian Günther was the youngest regular driver in the history of the racing series at the age of 21 years. In Paris and Bern he finished in the top 5 after a strong pace and scored a total of 20 points in his rookie season.

With this performance the German attracted attention and recommended himself for a BMW factory cockpit. In 2020, he scored two race wins and a second-place finish in his first year as a BMW works driver, once again making history as the youngest race winner in the history of Formula E. In 2021, he clinched the first win on American soil for his team BMW i Andretti Motorsport at the New York City E-Prix.

In 2016 and 2017 Maximilian Günther was in working as DTM test and replacement driver and Formula 1 simulator driver for Mercedes. Two times he was named Germany’s Motorsport Talent of the Year by the Deutsche Post Speed Academy and was also voted ADAC Junior Motorsportsman of the Year by a panel of experts in 2016.